Wes and I scratched our heads in puzzlement.  Nothing made sense.  We had to call a mulligan on the GPS and get our exact point, but it still didn’t make the maps mesh with what we saw around us.  We pointed this way and that, wandered over one edge of the ridge and the other, but we just could not put it all together.

It was another ambitious day.  Even sitting in McDonalds, drinking Starbucks, I was a little intimidated by the route. It used to be I could never get a true sense of a route from staring at a piece of paper.  After many years of following those little squiggly lines, I now have a true appreciation of the teeny tiny spaces between them, and the relative differences between the numbers on those lines.

But commit to the day we did.  My car was left just outside of Empire, and we drove Wes’s car up Virginia Canyon Road.  It was a real option to just drive all the way up to the ridge line and go from there.  But where’s the fun and challenge in that, and this hike was nothing if not fun and challenging.

I wonder what the story is here.

We found our beginning point relatively easily, with all the barbed wire fences, old roads and mines scattered about. It was always a little bit of a celebration to reach that point and begin the “real” hike.  The route continued along the Clear Creek/Gilpin county line, but the classic stones had been replaced with long plastic markings, like the snow route markings along the highways.  More practical I’m sure, but not near as quaint.

Because of the lack of open space, we stuck close to the county line, thinking it was a good indication of property lines and our best bet for staying off private property.  For the same reason, our hike was quieter than usual, as we paid more attention than usual, while also trying to keep attention off us.  The few people that spied us simply stared in curiosity.

Seeing ourselves through other’s eyes is not often consoling.  What seems like a great idea and adventure to us was a source of the head tilt for others. There are people hiking the Pacific Crest Trail or the Appalachian Trail, both over 2000 miles long, who should make us seem quite normal.  Four days in over three months, covering not quite fifty miles, off trail, through the mud and bramble.  That isn’t all that crazy.

Ah, the odd signs we find 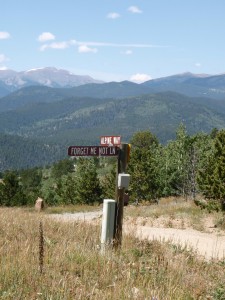 We crossed Virginia Canyon road.  We could see down into Central City.  One multi-storied building stuck out like the proverbial sore thumb. Or maybe pink elephant. But not a pretty pink  elephant.  The line between the old and the new was painful.  It made me wonder for the future of small town Colorado.

So many small towns, with rich histories and not much to protect them.  What would it take to turn other towns into casinos and ski resorts?  Or worse, into mining wrecks? Everywhere we hiked that day, the landscape looked like giant prairie dogs had had a field day, hole after massive hole.  Mountains and valleys have already been lost in the name of progress, and there’s not much stopping it.

It was after crossing Fall River Road and traversing a ridge back into another valley that we’d found ourselves scratching our heads.  In retrospect, part of the issue was tunnel vision.  We had looked straight at where we thought we were on the ridge and where we wanted to go.  When we looked less closely, we realized our main feature–a Y where two streams intersected–was repeated in a couple of places, and trying to pick out exactly which one was proving to be impossible.

This is the challenge of navigation.  You never really know where you are.  It’s kind of like life in that regard.  You follow your chosen path the best you can, based on the map given you, but a shortcut here, a detour there, a quick look over another ridge, and suddenly you are not where you had planned.  And tunnel vision.  That’s never a good thing in life.

And like life again, Wes and I plunged forward, hoping that eventually it would all make sense.

And it did. Another ridge showed us a four wheel drive road that was easily identified on the map, and on we went.

But now the day was slipping away and we had to face our over-ambition. We found a peak we could reach relatively quickly on our next day, and plunged down into Dumont, three miles shy of our car in Empire.

To add insult to injury, the heavens decided to shower us.  We were a sad sight, walking along the road, tired and soaking wet.  We made a halfhearted attempt at hitchhiking, but decided it really wasn’t that far. 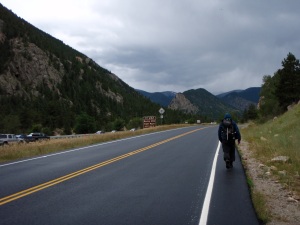 And of course, with our car in sight, a sweet couple pulled over and offered us a ride.  I hope the rest of their day was amazing for their thoughtfulness.